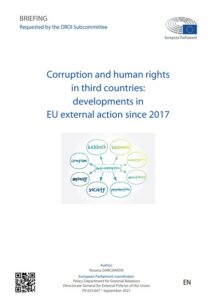 TEPSA has coordinated a study requested by the European Parliament’s Subcommittee on Human Rights (DROI). The study was authored by Rosana Gardiandia, Research Fellow in Labour Exploitation and Human Rights at the British Institute of International and Comparative Law (BIICL), United Kingdom. The study is entitled “Corruption and human rights in third countries: developments in EU external action since 2017”.