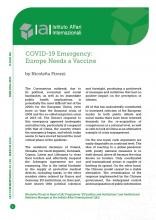 The Coronavirus outbreak, due to the extent of its political, economic and social backlashes, as well as its immediate public health implications, is potentially the most difficult test of the 2000s for the European Union, even more so than the financial crisis of 2008 and the so-called migration crisis of 2015–16.

The Union’s response to this emergency appeared inadequate and rather late, particularly if compared with that of China, the country where the emergency began, and which today seems to have moved beyond the most critical phase of the epidemic.