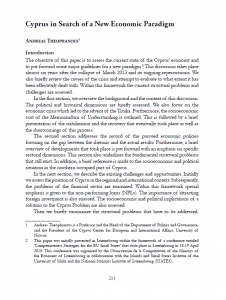 Andreas Theophanous, Cyprus in Search of a New Economic Paradigm, Vol 30 No 2 (2018): The Cyprus Review

The objective of this paper is to assess the current state of the Cyprus’ economy and to put forward some major guidelines for a new paradigm. This discussion takes place almost six years after the collapse of March 2013 and its ongoing repercussions. We also briefly review the causes of the crisis and attempt to evaluate to what extent it has been effectively dealt with. Within this framework, the current structural problems and challenges are assessed. In the first section, we overview the background and the context of this discussion. The political and historical dimensions are briefly assessed. We also focus on the economic crisis, which led to the advent of the Troika. Furthermore, the socioeconomic cost of the Memorandum of  Understanding is outlined. This is followed by a brief presentation of  the stabilization and the recovery that eventually took place as well as the shortcomings of this process. The second section addresses the record of the pursued economic policies focusing on the gap between the rhetoric and the actual results. Furthermore, a brief overview of developments that took place is put forward with an emphasis on specific sectoral dimensions. This section also underlines the fundamental structural problems that still exist. In addition, a brief reference is made to the socioeconomic and political situation in the northern occupied part of  Cyprus. In the next section, we describe the existing challenges and opportunities. Initially, we assess the position of Cyprus in the regional and international context. Subsequently, the problems of the financial sector are examined. Within this framework, special emphasis is given to the non-performing loans (NPLs). The importance of attracting foreign investment is also stressed. The socioeconomic and political implications of a solution to the Cyprus Problem are also assessed. Then we briefly summarize the structural problems that have to be addressed. It is also stressed that almost six years after the collapse of March 2013 Cyprus has no comprehensive economic paradigm yet. We also underline the importance of enhancing the effectiveness of public administration as well as of the optimal utilization of human capital. A comprehensive economic paradigm should also include new engines of growth. Last but not least we also briefly refer to the unresolved Cyprus Problem and to the relevant implications. Finally, a short epilogue places issues and challenges into perspective.