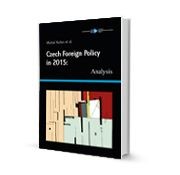 How did the Czech diplomacy cope with the year 2015, which was, in many aspects, a breakthrough year for the European security and politics? What kind of involved persons entered into the formulation of the Czech foreign policy, and in what ways? What was the impact of the new impulses which the Government of Bohuslav Sobotka brought into their foreign policy? Did the Czech Republic act actively, passively, with conflicts or cooperatively? Or was it only a fare dodger in the affairs of other countries? The team of authors from the Institute of International Relations (IIR) and other cooperating institutions gives the answers to these and a lot of other questions in the ninth periodical monographic analysis of the Czech foreign policy, the latest volume in a series that the IIR has been working on since 2007.