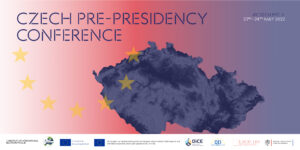 On 1 July 2022, France handed over the Presidency of the Council of the EU to Czechia, which holds its reigns once again, for the second time since becoming an EU Member State in 2004. During the second half of 2022, the Czech Presidency has to sail through troubled waters to address some of the most pressing EU issues, such as the Union’s response to the ongoing war of aggression being waged by Russia in Ukraine, as well as managing multiple ongoing files, such as the implementation of the EU Green Deal, reacting to the conclusion of the Conference on the Future of Europe, and much more.

To scrutinise the priorities and challenges of the Presidency, TEPSA and its Czech Member Institute, the Institute of International Relations in Prague, hosted the Czech Pre-Presidency Conference on 23 and 24 May 2022 in Prague.

The conference brought together academics, policy-makers, media and civil society in order to discuss the agenda and challenges of the upcoming Presidency. More specifically, the conference assessed the impact of the Russian-Ukrainian war on the future of European security, but it also explored a number of other key issues, such as the significance of the recent political reshuffle in Central Europe, the recommendations of the Conference on the Future of Europe as well as the new challenges to the Green Deal initiative.

WATCH THE FULL PANEL RECORDINGS OF THE CZECH PPC BELOW!

The Czech EU Presidency: What to Expect

In this panel, Welcoming Remarks to the Czech PPC are given by TEPSA Secretary-General Jim Cloos as well as IIR Prague Director Ondřej Ditrych. Following these remarks, the first plenary session of the conference takes place. The plenary session focused on the upcoming Czech EU Presidency and the key events that will define EU policy-making in the second half of 2022. The TEPSA Network presented its Recommendations to the Czech Presidency of the Council of the European Union to Jan Šnaidauf (Czech Ministry of Foreign Affairs). The TEPSA Recommendations were presented by Ilke Toygür (SWP Berlin & University Carlos III of Madrid) and Funda Tekin (IEP Berlin), as well as Kristi Raik (Estonian Foreign Policy Institute), Mihai Sebe (European Institute of Romania), and Mariam Khotenashvili (TEPSA).

The Russia-Ukraine War: a Crisis of European Security?

In this plenary session of the conference, we discuss the Russian war of aggression in Ukraine and its impact on European security. The session focused on the repercussions of the Russian-Ukrainian war and the consequences of the conflict for European security as well as the role of the European Union therein. The session was chaired and moderated by Ondřej Ditrych (IIR Prague), and featured the contributions of Kristi Raik (Estonian Foreign Policy Institute), Senem Aydin-Düzgit (Sabanci University & Istanbul Policy Center), Oleksiy Melnyk (Razumkov Center), and Roderick Parkes (German Council on Foreign Relations (DGAP)).

Central Europe: a Region in Reshuffle

In this parallel session we discuss the Central Europe region and its role in the European Union. The session will explore the recent developments regarding the evolution of the cooperation in Central Europe, in the context of the continued conflict between the European Commission and some members of the V4. This parallel session is co-organised with EUROPEUM Institute for European Policy. The session was chaired by Sabina Kajnč-Lange (European Institute of Public Administration), and featured the contributions of Péter Balázs (fmr. Hungarian Minister of Foreign Affairs), Marek Cichocki (College of Europe Natolin & European Center Natolin), and Magda Vášáryová (fmr. State Secretary of the Slovak Ministry of Foreign Affairs).

The Green Deal: Are We Fit For Carbon Neutrality?

The Future of European Integration: after the Crises and the CoFoE

This session discusses the future of Europe after the crises and the Conference on the Future of Europe. This session explored the impact of the Conference on the Future of Europe. This panel is organised in the framework of the Horizon 2020-funded project DiCE: Differentiation Clustering Excellence. The session was chaired by Jakub Eberle (IIR Prague), and featured contributions from Nicoletta Pirozzi (Istituto Affari Internazionali), Jaap de Zwaan (fmr. TEPSA Secretary-General), Frank Schimmelfennig (ETH Zürich), and Ilke Toygür (SWP Berlin & University Carlos III of Madrid).

In this session, closing speeches are given by Jakub Utěšený, Director of the Czech Presidency Preparation and Coordination Unit, Ministry of Foreign Affairs of the Czech Republic, as well as TEPSA Chairperson Lucia Mokrá and Petr Kratochvíl (IIR Prague).

This Pre-Presidency Conference was organised by the Trans European Policy Studies Association (TEPSA) and the Institute of International Relations in Prague. The event was supported by the Ministry of Foreign Affairs of the Czech Republic and EUROPEUM. The project received funding from TEPSA’s CERV Operating Grant, the Central European Initiative (CEI) and the DiCE project, under the European Union’s Horizon 2020 research and innovation programme under grant agreement No. 870789.