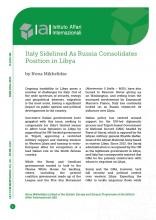 Ongoing instability in Libya poses a number of challenges for Italy. Out of the wide spectrum of security, energy and geopolitical interests, migration is the most acute, having a significant impact on public opinion and political developments in the country. Successive Italian governments have grappled with this issue, seeking to compensate for Italy’s limited means to affect local dynamics in Libya by supporting the UN-backed government in Tripoli, approving restricted military support and training mission in Western Libya and turning to extra-European allies for recognition of a lead Italian role in the North African country. While the Renzi and Gentiloni governments tended to look to the Obama White House for backing, others, including the present coalition government made up of the League and the Five Star Movement (Movimento 5 Stelle – M5S), have also turned to Moscow. Never giving up on Washington, and reeling from the increased involvement by Emmanuel Macron’s France, Italy has cautiously looked on as Russia enhanced its influence over Libya.