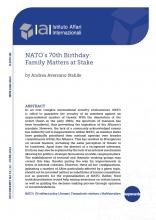 In an ever-complex international security environment, NATO is called to guarantee the security of its members against an unprecedented number of threats. With the dissolution of the Soviet Union in the early 1990s, the spectrum of menaces has been broadened, thus preventing the expiration of the Alliance’s mandate. However, the lack of a commonly acknowledged enemy has indirectly led to fragmentation within NATO, as member states have gradually prioritised their national agendas over broader commitments within the Alliance. This has resulted in divergences on several dossiers, including the same perception of threats to be countered. Apart from the absence of a recognised adversary, frictions may also be explained by the lack of an internal mechanism allowing for politico-strategic discussions on wide-ranging matters. The establishment of sectorial and thematic working groups may correct this bias, thereby paving the way for improvements in terms of internal cohesion. However, these ad hoc configurations, gathering a number of Allies particularly affected by a given topic, should not be intended either as substitutes of formal committees nor as pioneers for the regionalisation of NATO. Rather, their institutionalisation would help to raise awareness on certain issues, as well as guiding the decision-making process through opinions or recommendations.