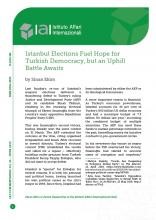 The re-run of Istanbul’s mayoral elections delivered a thundering defeat to Turkey’s ruling Justice and Development Party (AKP) and its candidate Binali Yıldırım, resulting in the stunning electoral triumph of Ekrem İmamoğlu from the country’s main opposition Republican Peoples’ Party (CHP). This was İmamoğlu’s second victory, having already won the same contest on 31 March. The AKP contested the outcome at the time, citing organised irregularities and fraud. After recounts in several districts, Turkey’s electoral council (YSK) invalidated the results and called for a repeat – effectively buckling under pressure from Turkish President Recep Tayyip Erdoğan, who did not want to accept defeat.