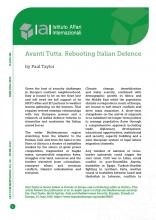 Given the host of security challenges in Europe’s southern neighbourhood, Italy is bound to be on the front line and will need the full support of its NATO allies and EU partners to weather storms gathering on the horizon. That requires revived strategic relationships with key European powers and a relaunch of stalled defence reforms to streamline and modernise the Italian armed forces. The wider Mediterranean region stretching from the Atlantic to the Persian Gulf, and from the Sahel to the Horn of Africa is a theatre of instability marked by the return of great power competition, fragmented or fragile states, uncontrolled migration flows, struggles over land, resources and the borders inherited from colonialism, resurgent ethnic and sectarian conflicts, Islamist radicalisation and terrorism. Climate change, desertification and water scarcity, combined with demographic growth in Africa and the Middle East while the population shrinks or stagnates in much of Europe, are bound to fuel future conflicts and drive mass migration. A short-term clampdown on the arrival of migrants is no substitute for longer-term policies.