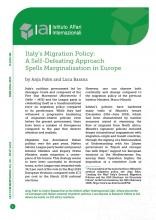 Italy’s coalition government led by Giuseppe Conte and composed of the Five Star Movement (Movimento 5 Stelle – M5S) and the League party is celebrating itself as a transformational force on migration policy compared to its predecessor. While Italy had witnessed a progressive hardening of migration-related policies even before the present government, there have been a number of divergences compared to the past that deserve attention and analysis. Migration has dominated Italian politics over the past years. Matteo Salvini, League party leader and present Interior Minister and Deputy Prime Minister, made migration a centre-piece of his tenure. This strategy seems to have been successful in electoral terms, as the League was rewarded with 34,3 per cent of the vote in the May 2019 European elections compared with 17,3 per cent in the March 2018 national elections. However, one can observe both continuity and change compared to the migration policy of the previous Interior Minister, Marco Minniti. Salvini’s policies have hardened many traits of Minniti’s tenure (December 2016–June 2018), which had been characterised by harsher measures aimed at stemming the flow of migrants from North Africa.