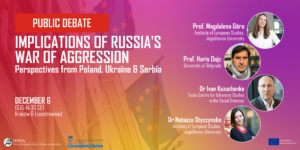 How the Russian war of aggression is perceived in Poland and Serbia? What does the war mean for the Future of Europe? Join us for a discussion covering Polish, Ukrainian and Serbian points of view of the ongoing war and its implications.

The discussion in this panel focused on European views on Russia, different perspectives on the aggression seen from Ukraine, Poland and Serbia, and the meaning of war to the Future of Europe and European integration.

This seminar was part of the series Europe’s Future, whose most recent publication, Russia and the Future of Europe. Views from the Capitals, has been published by the Springer Publishing Company. Editors are Michael Kaeding, University of Duisburg-Essen, Johannes Pollak, Webster Vienna Private University and Paul Schmidt, Austrian Society for European Politics. The series, which consists of monographs and edited volumes, analyses topical European issues from the perspective of each EU Member State and neighbouring countries, helping to understand the different aspects of the future of the European project.