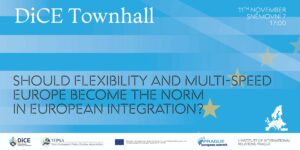 In the framework of the project ‘DiCE – Differentiation: Clustering Excellence’, on 11 November 2022, the Institute of International Relations Prague in cooperation with the Prague European Summit and Trans European Policy Study Association will organize a Townhall Meeting titled ‘Should flexibility and multi-speed Europe become the norm in European integration?’

In the past several years, Emmanuel Macron, Olaf Scholz, and leaders of other member states proposed their visions for the future of European integration as well as the wider European region. Some speak of creating a European political community as a framework for EU members and democratic non-members of the EU to discuss shared interests. The first meeting of the European Political Community took place in Prague in early October. Other arguments concern more efficient policymaking in the EU foreign and security policy via the introduction of majority voting or allowing the group of EU member states to act on behalf of others in this field.

Participants in this debate will reflect upon those proposals regarding the future of European integration and address the following questions:

The debate will include several panelists:

The discussion will be moderated by Zdeňka Trachtová from Czech Radio.