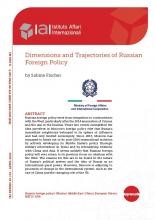 Russian foreign policy went from integration to confrontation with the West, particularly after the 2014 annexation of Crimea and the war in the Donbas. These two events exemplified the idea prevalent in Moscow’s foreign policy elite that Russia’s immediate neighbours belonged to its sphere of influence and had only limited sovereignty. Since 2015, Moscow has managed to break out of its post-2014 international isolation by actively developing its Middle Eastern policy (through military intervention in Syria) and by intensifying relations with China and Asia. It seems unlikely that Russian foreign policy will ever return to its previous focus on relations with the West. The reasons for this are to be found in the nature of Russia’s political system and the idea of Russia as an international great power. Moreover, Moscow is adjusting to processes of change in the international system, such as the rise of China and the changing role of the US.