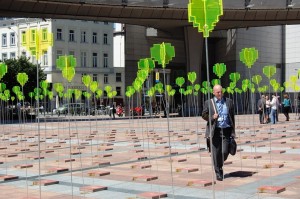 When the Lisbon Treaty entered into force it seemed that the issue of democratic deficit in the European Union had been solved.  It encompassed the concept of the EU based on a dual democratic legitimacy: direct and indirect. It developed both representative and participatory democracy, thus confirming the interaction existing between civil society and the institutions of the Union. In the end it had strengthened the involvement of national parliaments.
However, creating a democratic framework appeared insufficient to bring about a real democratic sphere. In addition, it is questionable whether this step has weathered the economic crisis, what consequently leads to a revival of the member states gathered in the European Council, and to a new democratic (re-)structuring.

The current institutional framework does not appear to be a sufficient platform for discussions and social interactions. As long as the EU institutional set-up works satisfactorily, it remains largely internal and does not provoke any debates across the Europe. The consequence is that the Union remains largely absent in the public debate.

There are multiple causes of this. The nature of the debate within the EU is often very technical, hardly arousing any public interest. It does not signify that the issues discussed are regarded by citizens as useless. But rather that the institutions often (rather unconsciously) prefer, to address issues from a technical angle instead of to shedding light on the political implications of the file at stake, notwithstanding the efforts of the European Parliament to counter this. This is likely due to the fact that it is easier to build consensus this way than to raise the issue from a purely political angle. Yet the decision-making process of the Union is based on consensus: consensus between the states within the Council, consensus among political groups in the Parliament and finally, consensus between the Parliament and the Council. Without the politicization of debates, the interest of the public, which is the engine of democracy, will default. But politicizing the debate does not mean to debate on issues of institutions’ respective powers, as it was often assumed by the Parliament. It goes beyond that, aiming to show how the different options of a legislative project may have an impact on the daily lives of Europeans and to defend one of these options. European citizens are often too far away from debates on comitology or inter-institutional relations, which concern only a limited circle of aficionados.

Regarding the representation of citizens, it has often been pointed out that European elections are ‘second order elections’ compared to national elections. This might remain the case until European parties become more structured, although there has recently progress been made in that direction. The voting system places the election in the hands of national political parties that are themselves often divided on their approach towards Europe. The cleavage between euro-skeptics and supporters of integration is present within several major national political parties. Under these conditions it seems hardly conceivable that these parties could develop a genuine European vision that goes beyond a vague discourse on Europe as that would risk to trigger internal divisions.

All this does not actually signify that the European debate does not exist, but – as the crisis has already shown – that discussions take place at the national level and not at the EU level.

II. Lessons from the crisis

The crisis has combined two elements that need to be answered regarding democracy at EU-level. First, the crisis has affected a vital part of national cohesion, the social pact. The need for structural reforms revisits the social foundations that the social order the twentieth century was built on. Such a change cannot occur without strong opposition at the national level. Consequently, the whole way of living together is affected. Secondly, following the treaties, solutions cannot be developed under the Community method, but only within the intergovernmental framework, where governments are responsible within the legal order of their national systems. The national government leaders have two different roles: on the one hand they represent and defend their national interests within the European Council, on the other hand they need to explain and defend the decisions of the European Council to their national constituencies. Europe can hardly be the scapegoat for decisions taken by all (national) heads of states. Taking this into account, it can be observed that no member of the European Council, including the German chancellor, can replace the Commission in that respect.

In any case, measures cannot be taken without the support of national actors (not only parliaments, but sometimes also constitutional courts) and the European debate should be brought to the national level. How can one say that constraints imposed on national budgets only arise from EU level decisions, without then also acknowledging that the EU has the democratic legitimacy to do so? TEPSA and Notre Europe have put forward ideas for new forms of control of the European Council by national parliaments, but this control could only function if the national debate on European issues continues to be salient, and even have a decisive influence on the existence and composition of national governments in national election campaigns.

Is it necessary to reform the system or shall one allow the process to evolve before attempting to stabilize it? It is of great importance for the institutions and political parties to give a real impetus to the democratic framework created by the Lisbon Treaty, yet this is not sufficient. We know that on issues that affect the heart of the national pact, such a solution is insufficient. In these areas, if one wants to avoid a revolt against Europe, one should make use of national structures, especially parliaments, as places for discussions and explanations. Allowing the evolution to evolve naturally carries the risk of triggering divergent trends and movements of populism. It is necessary to find opportunities for debates between national and European politicians. The meetings of members of the European Parliament and deputies of national parliaments’ finance committees, as established by the “Treaty on the coordination of the Euro-zone” constitutes a first step, but needs further reflection. How can one imagine a multilevel Europe without multilevel democracy and real multilevel parliamentarism?