The event on “Public Diplomacy: a Foreign Policy Challenge”, was organized on 10 Septembe 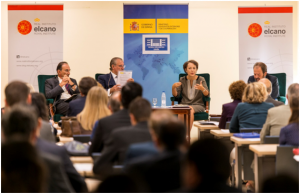 r 2014 by the Ministry of Foreign Affairs and Cooperation, the Spanish Diplomatic School and the Elcano Royal Institute.  Using the Davos format, each panelist made a presentation (max. eight minutes), follo
wed by a debate and public Q&A. The proceedings were aired via streaming on the Elcano’s website and questions were received by Twitter from outside participants.

A Working Breakfast with Richard Wike, Director of Global Attitudes Research (Pew Research Center) was organised on 8 September 2014. The topic of the meeting was ‘America’s Place in the World: A Global and American Perspective’.