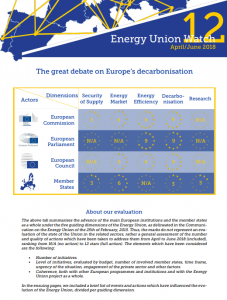 The Energy Union has started its great debate on the future of Europe’s decarbonization – a long, heated discussion which is however fundamental both to guarantee the achievement of the targets of the Paris Agreement, and to prepare the EU for the upcoming challenges brought by the surge of renewables worldwide. The picture has become more complicated than it appeared in November 2015, when the Agreement was signed, and the international turmoil caused by President Trump’s decision to exit the treaty is hardly the only or even the most relevant cause of this change.

The still strong heterogeneity of European countries, both in terms of energy and climate vision and regarding their energy mixes, the tough and perhaps increasing competition on renewables by China, the unclear efficacy of European tools designed to promote renewables and decarbonize the economy – still incomplete or barely functioning, as in the case of the EU-ETS – are all casting doubt on the trajectory of Europe’s decarbonization.

The situation will be perhaps be clarified by the outcome of negotiations underlying several pieces of legislation in the Clean Energy for All Package, which commenced in the past months and whose completion has come closer thanks to recent activity on the part of the Commission, the Parliament and the Council.

The evaluation study is available here.