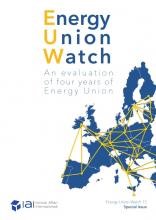 This special issue of the quarterly Energy Union Watch aims at providing an overall evaluation of the Energy Union, the ambitious initiative regarding European energy policy launched between 2014 and 2015 by the Juncker Commission. The analysis has been developed through a general perspective of political and legislative action on the Energy Union in its four years of activity (Part 1: Four years of Energy Union) and via a detailed overview of the National Energy and Climate Plans (NECPs) provided in the previous months by the Member States (Part 2: An analysis of the NECPs), divided into the five guiding dimensions on which the activities of the Energy Union have been structured. The aim is to describe actions at the level of European institutions as well as the contributions made by the Member States, as described in the NECPs, which will be at the core of translating the Energy Union vision into reality. This report is complemented by an interview with the Vice President for the Energy Union, Maroš Šefčovič, on the future of the initiative, a timeline highlighting the major activities and achievements of the Energy Union and a contribution from the World Energy Council focused on the Italian NECP.