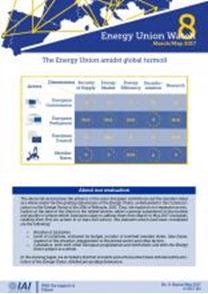 It is a time of global confusion vis-à-vis topics which are key to the European energy sector, from decarbonization to the geopolitics of energy. Indeed, the instability brought by the resurfacing of old issues, such as the Gazprom case, and the appearance of new ones, as in the uncertain destiny of the Paris Agreement, threatens the development of the Energy Union, still in process.

Yet, these troubles could also represent a positive opportunity for the Commission; as Member States are facing issues on an increasingly greater scale, the Energy Union could represent the tool to resolve controversies, such as Gazprom’s dominant position in Central and Eastern Europe, or to fully exploit possibilities, such as the development of Eastern Mediterranean resources, that States could not possibly solve alone. The potential depends on the ability of Vice President Šefčovič, and to some extent of Commissioner Arias Cañete, to tame Member States and to transform into legislation the proposals made in the massive Winter Package presented last February.