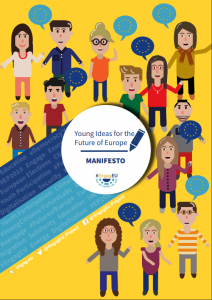 On 30 April, the #EngagEU Manifesto “Young ideas for the future of Europe” has been presented by young rapporteurs to the public in Berlin.

The Manifesto is the result of the project #EngagEU which aims at empoyering young people. With the project #EngagEU the Institut für Europäische Politik and its project partners in France, Centre international de formation européenne, Poland, WiseEuropa, and Brussels, the Europe-wide Trans European Policy Studies Association, organised a several months lasting collection and consultation process for ideas regarding the future of the European Union. Innovative digital tools will be used in order to enhance people’s participation during and after the idea development process.

Young Citizens from all around Europe were invited to discuss youth relevant topics and ideas in four #YoungCitizens’FutureLabs aiming to lend them a strong and loud voice in the election campaign in the run-up to the elections in 2019.