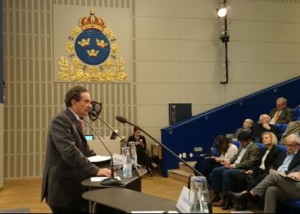 On 26 November 2015 The Swedish Institute of International Affairs (UI) together with the Trans European Policy Studies Association (TEPSA) hosted a conference about the European Union’s Eastern Partnership policy and the prospects for security, stability and prosperity in Belarus, Georgia, Moldova and Ukraine.

The first panel, entitled “New Challenges and Threats: How to Improve the EU’s Eastern Partnership Policy?” featured keynote speakers from the EEAS, La the Latvian Parliament and the Eastern Partnership Ambassador of Sweden, who all shared insights from their work within the EU and the national decision-making processes.  The second panel, entitled “More Effective Support for the EU’s Eastern Partners: How?” addressed the challenges that Ukraine, Moldova, Georgia and Belarus have to master. The four invited experts from the respective ENP countries shared their insights into the difficult domestic political conditions, and how these countries relations with the EU are influenced by the external pressures from the Russian government. The Third panel, entitled “The Challenge of Communicating the Eastern Partnership “post-Crimea”” focused on one of the biggest challenges that the EU, the member states, and Eastern neighbours are facing: how to explain to EU citizens, and the citizens of the Eastern partners, what the Eastern partnership is, what the EU does, why and how the member states are engaged in the ”Eastern Partnership”, and what closer relations with the EU will mean for the citizens and for European security, stability and prosperity? The panelists discussed how the EU can make itself understood. It brought together experts closely familiar with the challenges of communicating the Eastern Partnership.

The conference was followed by an Expert Roundtable on New Strategic Communication Challenges in Europe: How do we identify, understand and address disinformation? Against the background of growing concerns in Europe about the effects of Russian propaganda in the Eastern neighbourhood and even the EU, the roundtable discussion focused on the challenge of how to respond to disinformation and the abuses of the open information spaces. Participants explored ways and means of identifying and addressing disinformation that is spread by different actors through traditional and new “social” media channels and platforms. Both the conference and the roundtable discussion were moderated by Anke Schmidt-Felzmann, Researcher in UI’s Europe programme.

The full conference programme can be downloaded here. The report of the conference can be found here.

More information about the event can be found on UI’s website.

You can find below the podcasts of the panels: