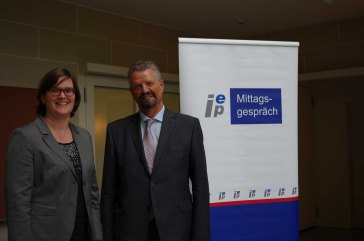 The second event organised in the framework of the ENURC project was the Lunch Debate organised by the project partner IEP in Berlin. IEP organises “Lunch Debates” on key topics of the current agenda of European politics. On September 22, 2015 the ENURC IEP Lunch Debate was hosted in the representation office of the German state Saarland. The keynote speaker was Dr. h.c. Gernot Erler, member of the German Bundestag and coordinator for intersocietal cooperation with Russia, Central Asia and member countries of the Eastern Partnership. The debate on “The New Russia as a Challenge for European Politics” was moderated by Dr. Katrin Böttger, Deputy Director of the Institut für Europäische Politik (IEP).

Erler’s speech which was divided into three sections: the partnership with Russia, the Ukraine crisis and its significance for EU-Russia relations, and the future of these relations. According to Erler, the Russian Federation has undergone with the European Union a relation of “ignored alienation” since 1990. From the EU’s perspective, a joint and strategic partnership with Russia had developed thanks to the regular EU-Russia Summit and the intensifying civil society and economic alliances. However, Russia increasingly alienated itself from the idea of establishing congruent interests. Russia’s constructive participation in the nuclear negotiations with Iran, the call to establish an anti-terror coalition against the IS in Syria, along with the recently active action against separatists in eastern Ukraine have made it clear that the Russian Federation is less interested in isolation and an escalation of the Ukraine conflict and more interested in a western orientation, according to Erler.

The ENURC IEP lunch debate attracted an audience of 170 participants. It provided an excellent occasion for German nationals and citizens from other countries to share their views on the impact of Russia on the European Union. There were 26 nationalities present during the event. There were participants from Germany, the United States, Russia, Canada, Norway, Uzbekistan, Hungary, Poland, Portugal, Ukraine, Latvia, Finland, Estonia, Slovakia, Moldova, Lithuania, Bosnia-Herzegovina, Serbia, Bulgaria, Romania, Spain, Belgium, the Czech Republic, Switzerland, Denmark and Sweden. For the Europe for Citizens Programme only EU member states are included when calculating the number of participating countries, so 17 EU member states.

You can download here the programme and the report of the event.

More information on the event can be found on the IEP website.