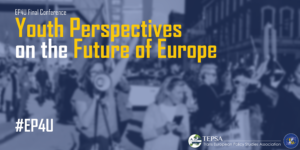 In a Europe dominated by quick-fire crisis response, it is increasingly important that the voices of European citizens be heard. The EU’s channel for citizens to make suggestions for the future of Europe, the Conference on the Future of Europe, has recently concluded. We want to continue amplifying young citizens’ voices!

The conference was composed of two main panel discussions, which explored the interconnections between, respectively, social policies and fundamental rights, and climate and migration. These open dialogues brought academics and practitioners together with the four EP4U Student Contest winners to discuss young people’s vision for the future of Europe. The conference provided a space for the public to actively participate in discussing the work of the EU and sharing their views with decision-makers.

We are delighted to have hosted some of Europe’s leading academics from around the TEPSA Network as expert speakers at the EP4U Final Conference:

All four have been a part of the EP4U project since the start, helping us to reach into the EU Member States and share discussions with young people across Europe. During the conference they moderated each of the panels, and fostered a cross-cutting discussion with the four EP4U Student Contest winners, who presented their visions for the future of Europe: Aron Bosman, Niccolò De Vita, Stevan Đurić, and Lilybell Evergreen.

The four EP4U expert speakers and student contest winners had the chance to discuss their visions for the future of Europe with practitioners from multiple EU Institutions. As such, the conference was their chance – and the chance for those who attended – to discuss future prospects for the European project with those who make key policy decisions in the EU:

In addition to discussions in our two main panels, the conference’s Opening Remarks were held by TEPSA Executive Director Mariam Khotenashvili along with Dr. Benjamin Tallis from the Hertie School. Closing Remarks were given by TEPSA Chairperson Lucia Mokrá and TEPSA Secretary-General Jim Cloos.

In the Opening Remarks, TEPSA Executive Director Mariam Khotenashvili welcomed Dr. Benjamin Tallis (The Hertie School) for a dynamic exchange on the impact of Russia’s war of aggression in Ukraine on the future of Europe. Arguing that the EU ought to change it’s attitude from one of ‘protective security’ to one of ‘progressive security’, Tallis called for the Heads of State and Government to display true vision for the future of the European project in his impassioned speech.

The first panel of the conference was entitled “EU Non-Discrimination Policies in the Western Balkans: the Case of LGBTQI+ Rights” and was built around the two winning EP4U Student Contest papers by Stevan Đurić and Niccoló de Vita. The panel was moderated jointly by Tom Chevalier (Sciences Po) and Michaela Dénešová (Comenius University in Bratislava). Stevan and Niccoló discussed their papers with Myrthe Bovendeaard, European Parliamentary Assistant to Kim van Sparrentak MEP.

The conference’s second panel was entitled “Migration and Climate Change: Crosscutting Effects and Potential Synergies for EU Policies” and was built around the two winning EP4U Student Contest papers by Aron Bosman and Lilybell Evergreen. The panel was moderated jointly by Emma Hakala (Finnish Institute of International Affairs) and Evelina Staikova (New Bulgarian University). Aron and Lilybell discussed their papers with David Prpa and Valentin Dupont, both from the General Secretariat of the Council of the European Union.

The EP4U Online Final Conference was formally closed by TEPSA Chairperson Lucia Mokrá and TEPSA Secretary-General Jim Cloos. Their remarks focused on the role of youth engagement in building a bright future for the European project. Both were encouraged by the ideas presented by the EP4U Student Contest winners at the conference, and praised the warm reaction the papers received from policy-makers.