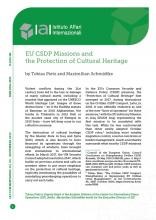 The destruction of cultural heritage by the Islamic State in Iraq and Syria (ISIS), which is also known to have financed its operations through the smuggling of artifacts, have brought new momentum to international efforts. In March 2017, the UN Security Council adopted resolution 2347, which builds on previous actions and calls on member states to put more emphasis on the protection of cultural heritage, explicitly mentioning the possibility of mandating peacekeeping operations to carry out such tasks. In the EU’s Common Security and Defence Policy (CSDP) missions, the “Protection of Cultural Heritage” first emerged in 2017, during discussions on the Civilian CSDP Compact. Later, in 2018, it was officially endorsed as one of the new “lines of operation” for these missions.