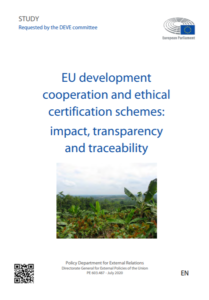 ‘Transparency’, ‘Traceability’, ‘Sustainable standards’, ‘good agricultural practices’ and ‘zero-deforestation’ are all fine terms which [alongside many others] have emerged in connection with the cocoa sector’s certification process. But does the reality of this process justify using such terms? Our initial conclusions in this study, based on an analysis of existing research over recent years, revealed that a considerable number of investigations had been commissioned by the certification schemes themselves. Key findings presented by the various studies all conveyed a positive tone. However, on closer inspection we felt that smallholders covered by the programmes were ‘following party lines’ rather than speaking freely. This suspicion was well-founded. Having built up trust in the villages during several years of field-work, we eventually gained access to exclusive data held by the cooperatives and certification programmes. We have used this evidence in order to draw a comparison between the virtual world portrayed by certification schemes’ narrative and the real world being faced by cocoa producers. Certification schemes claim that they give a sense of trust within the value chain, particularly in regard to produce traceability. They also claim to assist farmers, by way of training, various inputs (fertilisers etc.) and credit schemes. In reality, these ‘advantages’ are not visible at farm level. Budgets prepared by cooperatives to justify the use of premiums reflect structural flaws in certification and access to information. Serious questions arise surrounding deforestation, child labour and the payment of premiums. Social investment is minimal and consumers’ perception diverges from the reality. In conclusion, we make a number of key proposals and suggestions based on stakeholders’ complaints and recommendations.