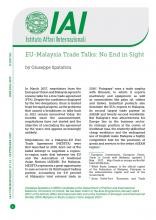 In March 2017, negotiators from the European Union and Malaysia agreed to resume talks for a free trade agreement (FTA). Despite the confidence displayed by the two delegations, there is limited hope for rapid progress, as the problems that caused a breakdown in talks back in 2012 remain unresolved today. Six months since the announcement, negotiations have not started and the objective of concluding the agreement by the year’s end appears increasingly unlikely.