The world is still suffering from the COVID-19 crisis. Economies on all continents have been seriously affected, with all the consequences for their businesses and citizens. Gradually our societies are trying to find their way out of their lockdown situations. They are also considering ways of recovering economically from the crisis.

At the level of European Union policy making, a variety of proposals can be identified regarding the establishment of financial programmes to stimulate new economic initiatives and to support weak sectors and regions. Those projects, though, are not only connected to the recovery from the COVID-19 crisis, but have their origin in the specific context of the Eurozone cooperation as well.

First, the judgment of the German Constitutional Court (‘Bundesverfassungsgericht’) of 5 May dealing with the legality of the huge Public Sector Purchase Programme (PSPP) of the European Central Bank (ECB). In that judgment, the German Court held that the EU Court of Justice (ECJ), by confirming the validity of the PSPP in a preliminary ruling of 11 December 2018, has delivered a non-comprehensible decision. The German Court argued that the ECJ had not adequately performed a proportionality test regarding the effects of the said programme, and thus had exceeded its competences. According to the German Court, the Luxembourg judgment was therefore rendered ‘ultra vires’.

This was an unprecedented act on behalf of a national court (in this case the ‘highest’ constitutional court of a Member State): refusing to accept the outcome of ECJ proceedings! The decision was all the more remarkable since the Luxembourg judgment of 11 December 2018 was actually rendered upon the request of the Bundesverfassungsgericht itself!

So, the German Court decision of 5 May represents a quite serious matter in light of the fact that the ECJ, in its capacity as European Supreme Court, is the competent authority to ultimately decide how EU law is applied and interpreted. To that extent the hierarchal order between the ECJ and national courts as well as the fundamental principle of primacy of EU law over national law (constitutional law of the Member States thereby included), have been explicitly disregarded by the Bundesverfassungsgericht. The judgment must therefore be considered a treaty violation, for which the Member State concerned – in this case Germany – can be held accountable. The question now, of course, is whether the Commission will initiate an infringement procedure against Germany because of this incident. 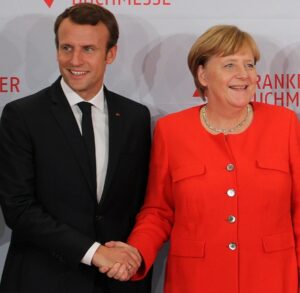 It may be, however, and that brings me to the second development, that the unfortunate German judgment will have a positive consequence as well. Because the judgment can also – and perhaps should – be understood as a clear message to policy makers: you cannot, in situations of political stagnation, put crucial responsibilities on the shoulders of other actors not involved in the policy making concerned, in this case the ECB and the ECJ. So, an appeal is made to politicians to act themselves in such situations.

And, indeed, that is what German Chancellor Angela Merkel did, in a joint effort with the French President Emmanuel Macron, when they launched on 18 May a French-German Initiative ‘for the European Recovery from the Coronavirus Crisis’. It is an interesting document, reflecting proposals focusing on the areas of EU Health Strategy, Green and Digital Transitions, EU economic and industrial resilience and, directly connected to that, Single Market cooperation. In parallel, the French-German Initiative proposes the setting up of an ambitious Recovery Fund at EU level ‘for solidarity and growth’. The main idea being that a fund of  €500 billion will provide budgetary expenditure for the sectors and regions most affected by the coronavirus, on the basis of EU budget programmes and in line with European priorities. So, a temporary mechanism embedded in the context of the ordinary EU Multiannual Financial Framework, thus guaranteeing democratic decision making at the EU and national level.

Of course, many details still have to be worked out. In that sense the concrete proposals of the Commission, scheduled for 27 May, will certainly provide a comprehensive and balanced approach. That said, the common French-German proposals show a constructive way forward.

In this case urgency is needed. Let’s hope, therefore, that our national politicians will indeed take responsibility, and deal with the Commission proposals in a proactive and effective manner.