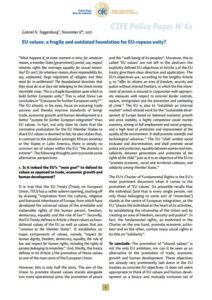 “What happens if, at some moment in time, for whatever reason, a member State (government) cannot, say, respect minority rights like marriage equality for sexual minorities? Or can’t, for whatever reason, share responsibility for, say, unplanned, large migrations of refugees and their need for re-settlement? The foundational directives that they must do so or face not belonging to the Union invites inevitable crises. This is a fragile foundation upon which to build further European unity.”

This is what Steve Lee concludes in “A purpose for further European unity?”.
The EU should, in his eyes, focus on ensuring trade success and thereby improve standards of living: trade, economic growth and human development is a better “purpose for further European integration” than EU values. In fact, not only does he claim that the normative postulation for the EU Member States to share EU values is doomed to fail, he also states that, in contrast to the situation amongst African societies or the States in Latin America, there is simply no common set of values within the EU: “the diversity is extreme”. The following thoughts aim to provide some alternative perspectives.