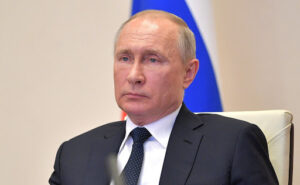 The recent bilateral contacts between Biden and Putin have led to a flurry of comments about the role of the EU. This is understandable but also a bit disheartening because it points to a lack of self-confidence on the part of the Europeans. Rather than complaining and whining, the Europeans should, when analyzing the situation, also look at their own considerable appeal and potential.

There is no point comparing the EU to the USA. Germany and France each spend nearly as much on defense as does Russia, but the EU as such is not a military power and will not be any time soon. For historical reasons, it is NATO that has ensured our hard security, and that will not change in the immediate future. It is not shocking that the American President, who has a leadership role within NATO, talks directly to Moscow on security. The Americans must make sure that the NATO partners and the EU are consulted on every step. The Europeans should use the French Council Presidency to develop a more strategic perspective and enhance European military capabilities. This will strengthen NATO and our joint defense in the short term; in the longer term, it will lead to a stronger European role and greater autonomy.

More importantly, the EU should be more conscious of its considerable influence vis-à-vis Russia. The EU is an economic and trade superpower, Russia is not. The Russian GDP in 2020, according to World Bank figures, was EUR 1.30 trillion compared to the EU’s 13.4 trillion (Italy alone has a higher GDP than Russia). Russia is much more dependent on the EU in terms of trade of goods than the reverse; Russia accounts for less than 5% of EU external trade while the EU accounts for nearly 40% of Russian trade. Even in terms of energy, where the picture looks different (Russian oil and gas amount to 26% respectively 40% of EU imports), this is a two-way street. How would Russia finance itself if it cut our gas supplies? Our demographic perspectives are not brilliant but better than Russia’s. We have far more cultural and societal appeal than Russia. Russian oligarchs love spending their money here rather than at home. Europe receives hundreds of thousands of migrants; Russia has a problem with emigration more than immigration. It is rare for Westerners to seek refuge in Russia, while the reverse is common indeed. Russia ranks exceptionally low in the Freedom House Score (20 out of 100 in 2021). Its corruption index according to Transparency International is thirty out of one hundred, which means rank 129 in the world. Putin talks about Russian security concerns. The truth is that what he is really scared about is the European appeal for Ukrainian citizens. The idea that Ukraine could become a true democracy and thus a challenge to his own regime must be his worst nightmare.

From a more operational point of view, there are a number of promising avenues suggested over the over the past months to increase our influence and effectiveness in relation to Russia and the handling of Ukraine crisis. We list a few of them here that may merit further reflection.

The first point relates to governance. It would make sense to review the Normandy format by directly associating the High Representative to it. France and Germany could also more use the Weimar triangle to involve Poland more systematically. They will not be able to sell solutions that elicit strong negative reactions from the Poles or the Balts, nor should they. By associating the latter more directly early in the process, they would reassure them and convince them to take a less systematically defensive approach in terms of relations with Russia. Long term solutions and a better neighborhood with Russia are core interests of all EU Member States. Ukraine will not come to rest without some form of understanding with Russia. Russia in turn must be made to understand that pursuing their aggressive stance against Ukraine may do more to estrange the country from Russia than anything the West could do.

The second element concerns developments in Ukraine itself. It is obvious that we cannot and should not refrain from our drive to transform Ukraine into just that, a thriving democracy, just to please Mister Putin. But part of this democratic process could be for the Ukrainians, in full autonomy, to have a fresh look at their own internal set-up, and actively seek a solution offering eastern Ukraine more autonomy. This could provide a lasting solution and help lower the temperature. It would also deprive Putin of a cheap propaganda argument and heighten the chances of at last implementing the security guarantees under the 2015 Minsk Agreement. Exclusively focusing on the remote and unrealistic perspective of a NATO accession does not seem to be a promising option.

A third aspect has to do with our energy relations with Russia. Would it not make sense for the EU to draw lessons from the vaccine procurement success and apply them mutatis mutandis to the energy field in the shape of grouped buying of gas? The Russians could see an interest in longer term stability this offers; from our perspective, it would kill almost any possibility for Moscow to play the energy card in a politically obnoxious way by targeting individual countries. Especially if we at the same time push ahead with energy interconnections and increased possibilities of reverse flows from west to east. In such a hypothesis, even the controversy about Nord Stream 2 would look quite different.

A fourth point on sanctions. The EU should focus more on instances where Russia or others act against our core interests rather than trying to transform Putin or Xi into democrats or lovers of human rights? Where Russia oversteps our red lines – and invading Ukraine would certainly fall in that category – we should go for really biting sanctions including in the financial sector, even at the price of taking losses ourselves. It would also be interesting to target the properties and bank accounts of Russian oligarchs in Europe; losing the goodies would certainly focus their minds and maybe make them look differently at the way the Putin regime functions. Concerning Russian cyber-attacks against European countries, the EU should be clear that they have to stop. If not, the time will come for adding to the defensive measures more offensive ones. Europe also has top class experts who could be mobilized to inflict damage as a last resort.

In relation to Russia but also much widely, the EU should pursue a systematic and comprehensive policy of strengthening its strategic autonomy. This is a pre-requisite for the EU becoming a true global player and having the freedom to act and shape the world. More joint procurement in key areas is one promising route. There are many others. This drive should extend to all major policy areas. It should comprise security and defense, but only in a long-term perspective and without calling into question NATO.

In conclusion, the EU’s approach should be based on reality and geared towards reaching the best possible results for us and Ukraine. It must be tough on Russia whenever needed, but also recognize when they have a legitimate concern. The debate about Ukrainian accession to NATO has flared up again because of threatening moves by Russia. It should be made clear that NATO expansion is by no means on objective as such nor an attempt to encircle Russia, but a debate fueled by the fear of an aggressive Russia. On the economic front, Ukraine is free to choose its way, including by concluding the agreements it wants with the EU, which already now accounts for nearly 40% of its trade. But the EU should signal its willingness to talk to Russia about effects on its own exchanges both with the EU and Ukraine. The EU has a rather good record in finding imaginative solutions preserving the interests of all sides; something even the British government will one day understand, hopefully.

One final word. It would help if in its relations with Russia and indeed Ukraine the EU could overcome its tendency to look at things from an overly technocratic and accountant’s angle. It should work harder to develop a political and positive vision for future relations. According to a recent article in The Economist two-thirds of Russian people have a positive view of the West and nearly 80% consider that Russia should see the West as a partner. That is something to work with. The authorities in Moscow love to blame the EU’s sanctions régime for the woes of the Russian economy. They have an effect, but the real issue is the home-made weakness of the economy. Having the EU as a partner would increase the perspective of the Russian people for a better life.

* This editorial is a result of exchanges between Laetitia Spetschinsky (Baillet Latour Chair on EU-Russia relations, UCLouvain) and myself. To read more of Laetitia’s thoughts on Euro-Russian relations, please take a look at her blog on the matter here (in French)