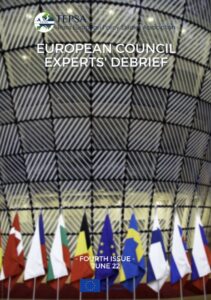 EUCO Debrief is our series of policy responses to the regularly published conclusions of the European Council. Each time the European Council meet for a summit, TEPSA gathers its leading academics to comment on the conclusions, analysing alliances formed, maintained, and broken, investigating the policy implications of the consensus reached, and prescribing solutions to move Europe forward. This month, our experts focus on a number of important topics discussed at the European Council: EU Neighbourhood and Enlargement, the European Political Community, the outcomes of the Conference on the Future of Europe and Treaty Reform, as well as the EU’s Energy Supply.

This month, in addition to the foreword and concluding remarks by TEPSA Secretary-General Jim Cloos, our expert contributors include: