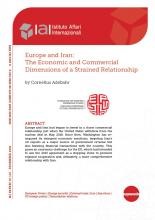 Europe and Iran had begun to invest in a closer commercial relationship just when the United States withdrew from the nuclear deal in May 2018. Since then, Washington has re-imposed its stringent economic sanctions, targeting Iran’s oil exports as a major source of government revenue but also banning financial transactions with the country. This poses an enormous challenge for the EU, which had intended to use the 2015 agreement as a stepping stone to promote regional cooperation and, ultimately, a more comprehensive relationship with Iran.

Paper produced in the framework of the IAI-FEPS project entitled “Europe and Iran in a fast-changing Middle East: Confidence-building measures, security dialogue and regional cooperation”, December 2018.