The THESEUS Seminar Europe@Work on European Energy Policy took place in Berlin and Brussels in June 2014. During the excursion, the participating political science and energy economics students from the University of Cologne together with students from the Turkish-German University Istanbul and the Charles University Prague visited different institutions, interest groups and policymakers to discuss current challenges of European Energy Policy. The first part of the excursion took place from 11 to 13 June 2014 in Berlin. Among the visited institutions were the German Parliament, the Federal Foreign Office and the German Economic Council. From 16 to 18 June 2014, the students spent the second part of their excursion in Brussels and visited amongst others the Permanent Representation of Germany to the North Atlantic Treaty Organisation (NATO), the European Commission and the European External Action Service (EEAS). At the heart of all discussions was the 2030 framework for European energy and climate policies and its impact on the industry. Also the ongoing Ukraine crisis and its consequences for energy security in Europe played a central role in the debates. Further information on the programme can be found here. 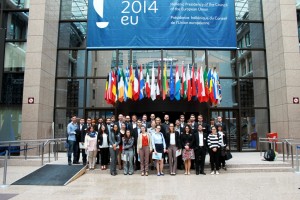