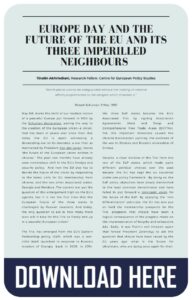 “World peace cannot be safeguarded without the making of creative
efforts proportionate to the dangers which threaten it.”
– Robert Schuman, 9 May, 1950

May 9th marks the birth of our modern notion of a peaceful Europe put forward in 1950 by the Schuman declaration, paving the way to the creation of the European Union—a Union, that has been at peace ever since then. But today the EU is again witnessing a devastating war on its doorstep, a war that, as mentioned by President Von der Leyen, leaves “the future of the European Union written in Ukraine.” The past two months have already seen tremendous shift in the EU’s foreign and security policy.  And now the EU also has to decide the future of the Union by responding to the latest calls for EU membership from Ukraine, and the two other Associated states: Georgia and Moldova. The current war put the question of this enlargement high on the EU’s agenda, but it is not the first time that the European future of the three states is challenged by Russian invasions. And today, the only question to ask is, how many more wars will it take for this Trio to finally end up in a peaceful European Union?

The Trio, has emerged from the EU’s Eastern Partnership policy (EaP), which was a war-child itself, launched in response to Russia’s invasion of Georgia back in 2008. In 2014, the three EaP states became the EU’s Associated Trio, by signing Association Agreements (AAs) and Deep and Comprehensive Free Trade Areas (DCFTAs). Yet, this important milestone caused the Ukraine Euromaidan uprising, the outbreak of the war in Donbas and Russia’s annexation of Crimea.

Despite, a clear division of the Trio from the rest of the EaP states, which made quite different political choices over the past decade, the EU has kept the six countries under one policy framework.  By doing so, the EaP policy objectives have slowly diminished to the least common denominator and have failed to put forward a long-term vision for the future of the EaP. By applying the “non differentiation” principle, the EU has also put on hold the membership prospects for the Trio, prospects that should have been a logical consequence of the progress made on the implementation of lengthy and exhaustive AAs. Sadly, it was Putin’s evil invasion again that forced President Zelenskyy to ask the question that should have been raised by the EU years ago: what is the future for Ukrainians, who are dying once again for their European choice? With this question Ukraine has opened the door towards EU membership and the rest of the Trio has followed suit with their membership applications.

Now it is in the hands of the EU to finally decide the future of the Trio. Going by the so-called Copenhagen criteria, the three applicants need to satisfy the political, economic and administrative conditions for EU membership. By administrative criteria the Trio should be eligible, as they have long been committed to approximating the EU acquis under the AAs. They should also satisfy the economic criteria, as the DCFTA implementation not only foresees having in place a free-market economy and liberal trade policies, but also foresees implementing policies for social, labour, environmental and sustainable development. In terms of political criteria, the three states come with their own internal problems. Ukraine was struggling with corruption and rule of law issues before the war; Moldova is finally being led by a pro-European government but there is still very little progress made on rule of law reforms and rooting out corruption; and Georgia, formerly known as the EaP’s best-performing country, is now backsliding on democracy and human rights. Yet, building democracy is not a linear process and the progress made by the Trio is still significant. Once considering all criteria together, the Trio still score as high as Western Balkan States who already hold candidacy status. By granting candidacy, the EU would only reinforce the democratic processes in the Trio by tying them to the lengthy commitments on needed reforms that come along with the candidacy status.  In the end, the accession process does not move forward without implementing needed reforms.

Opening new chapters for the Trio is not only a logical consequence of their Association with the EU, but it is also a moral and legal obligation of the geopolitical Union that the EU aspires to be. It is the Treaty on the European Union (TEU) that commits the EU to integrate “any European state which respects  [European] values and is committed to promoting them” (Article 49). Witnessing this devastating war in Ukraine now, makes this Treaty obligation also a moral imperative for the EU to show that the Ukrainian people do indeed belong to the European family. While considering the membership applications of the rest of the Trio, if their Association with the EU is not a sufficient argument, then the EU should carefully consider whether it is ready to witness new wars in Georgia and Moldova to be convinced that they too belong to the European family. Moldova, by sharing a border with the EU makes this question more urgent than Georgia, which does not have a land border with the EU. However, as a matter of principle, if the EU stands with the neighbours who die for their European choice, then the EU should also welcome Georgia, which despite its miniscule size went to war with Putin’s army in 2008, having now one fifth of its territory occupied by Russia and facing constantly moving borders from the breakaway regions. In the end, Georgia has been the EaP poster-child for years, scoring highest on the implementation of the AA and DCFTA to this date. As rightly pointed out by EU’s Strategic Compass, Russia’s hostile interference and extensive use of military instruments against Georgia and Moldova, compromise their stability and their democratic processes and have direct implications for EU security.

So, it is time for the EU to act in line with its Strategic Compass and leave behind its strategic ambiguity that the EaP has embodied over the past decade. The Trio is the main achievement of the EaP and if it succeeds then it means that EaP policy was not in vain—that, in the end, it did what it was supposed to do. It enabled the EU to act with its Treaty obligations to commit to neighbourly relations (Article 8, TEU) and to integrate the states that have proved their unwavering commitments to European values (Article 49, TEU). This is the only way forward towards a peaceful Europe and a secure EU, the war-child that Robert Schuman had in mind when writing his declaration on May 9, 1950, and this is the geo-political Union that the EU aspires to be today.

This article was written by Dr. Tinatin Akhvlediani, a Research Fellow at CEPS’ Foreign Policy unit. Her expertise and publications cover the EU’s trade and neighbourhood policies, with a specific focus on the Eastern Partnership and the EU’s Association Agreements (AAs) and Deep and Comprehensive Areas (DCFTAs) with Georgia, Moldova and Ukraine. The author is grateful to Dr. Branden Thornhill-Miller from the University of Oxford for editing this piece. 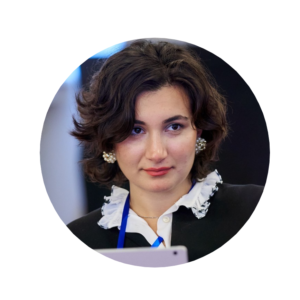 All the opinions expressed in this publication are the sole view of the author, and do not represent the position of the Trans European Policy Studies Association (TEPSA) or of its Members.

This piece has been published in EURACTIV.