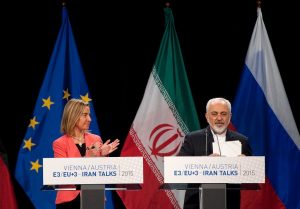 This study explores the EU’s role in reaching the Joint Comprehensive Plan of Action (JCPOA) with Iran on 14 July 2015. More specifically, the paper examines the validity of a statement made by High Representative Federica Mogherini, which suggests that it “mainly” was due to the EU that it was possible to settle the historic nuclear deal. This topic is particularly interesting because most recent studies have focused on the provisions of the JCPOA and its geostrategic impact rather than the political process behind the deal. In particular, the last stage of negotiations from November 2013 – July 2015 is under-investigated. The paper hypothesizes that the EU managed to sustain dialogue and initiate the major diplomatic breakthroughs. However, the paper finds that the Europeans did not provide the main impetus to reach the deal. Nevertheless, the EU played an important role in a promising negotiating format that perhaps can be applied to other cases in the future.