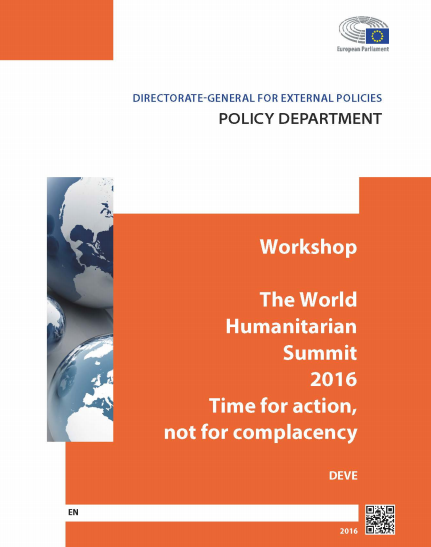 recently coordinated the participation of Rahul Chandran (Senior Policy Advisor, United Nations University Centre for Policy Research) in a workshop organised by the European Parliament’s Committee on Development and hosted by MEP Enrique Guerrero Salom, about the World Humanitarian Summit 2016.

For the workshop, which took place on 3 March 2016, Rahul Chandran prepared a contribution on “The World Humanitarian Summit 2016 – Requirements for an Ambitious Outcome”.

The paper outlines the need for Member States and other humanitarian stakeholders to take responsibility for the World Humanitarian Summit, drawing on the global consultations and the Secretary-General’s report, One Humanity: Shared Responsibility. It suggests that the core problem facing humanitarian action is that it is trying to deliver vastly different outcomes in a range of contexts that demand differentiated approaches. It suggests that the WHS cannot solve this wicked problem, but that through clear commitments linked to outcomes, it can begin to build systems that deliver as appropriate for each situation. It argues that Istanbul is a starting point, not an ending; highlights opportunities for deeper engagement; and makes a number of recommendations for commitments, including a format for commitments themselves.

Rahul Chandran is a Senior Policy Adviser with the United Nations University (UNU) Centre for Policy Research. His previous experience covers the areas of peacekeeping, development and humanitarianism, as well as a focus on UN reform. Before rejoining the United Nations, Mr. Chandran was the Deputy Director of the Center on International Cooperation, where he also helped to run the Afghanistan Reconstruction Program. Mr. Chandran also currently serves on the Consortium Advisory Group for the UK Department for International Development’s Secure Livelihoods Research Consortium, and acts as a peer reviewer for a number of journals. He has authored a number of reports, including “Humanitarianism in the Network Age” for the United Nations Office for the Coordination of Humanitarian Affairs, “Civilian Capacity in the Aftermath of Conflict”, which received widespread commendation in the UN Security Council, “From Fragility to Resilience” for the Organisation for Economic Co-Operation and Development, as well as “Recovering From War”, a report commissioned by the British government. Mr. Chandran holds degrees from Yale University and the Fletcher School of Law and Diplomacy at Tufts University.

The paper, as well as the full report of the workshop, can be downloaded here.