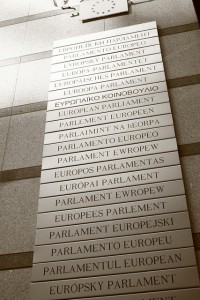 The upcoming elections of May for the European Parliament are a test case for the public support and, in a way, the credibility of the EU cooperation.

In many member states euro scepticism is gaining importance. Furthermore, in all member states the support for European cooperation has been affected negatively by the economic crisis.

People are already concerned that an important number of euro-sceptics will win a seat in the European Parliament. Apart from that, the risk of a low turnout does exist, as evidenced in earlier elections.

Obviously, a discussion about the ins and outs of European cooperation is a good thing. However, such a discussion should be organised in a balanced and nuanced manner. In debates of euro-sceptics one often hears only shouting, one-liners and slogans. Nonetheless, it is the full story that should be told and explained.

So far, from the side of national governments there is hardly any input to this debate. Yet, an adequate response is desperately needed.

In order to tell the whole story it seems that three things are important:

1. To demonstrate the necessity and importance of international cooperation,

2. To explain the adequacy of the EU framework for that purpose and, connected to that,

3. To explain the originality of the decision-making procedures.

As to the need for international cooperation one merely has to refer to the global threats and challenges of today’s world, such as the economic crisis; asylum and immigration; environmental protection, climate change and energy; scarcity problems with regard to water and food; combat of poverty; and combat of terrorism. All issues mentioned are, one way or the other, related to our security. Moreover, because all of them have an international character, it is obvious that individual countries are not able any more to cope with these matters on their own. On the contrary, the need for international cooperation is clearly indicated.

In Europe we have an appropriate framework for cooperation between states at our disposal: the European Union with its institutions and legal instruments. Indeed, different from other international organisations where essentially decisions having a political character are produced, it is in the framework of the EU -a community of law- that policies can be truly developed.

Then, when one analyses the essentials of the decision-making procedures of the EU it becomes apparent that member states are in fact fully in control. Because, they -as ‘Herren der Verträge’- are the ones who negotiate and conclude the basic texts, the treaties. They are also the ones who -in the European Council, the framework of member states’ representatives at the highest political level- establish the general political guidelines including the policy priorities of the EU as well as the timetable for their completion.

It is only within the framework thus established by the member states themselves that the so-called supranational procedures are of application: the exclusive right of the Commission, (qualified) majority voting in the Council, and co-legislative competences for the European Parliament. Last but not least, the Court of Justice controls the legality of the acts of the institutions.

All these elements have their justification. The Commission operates in the general interest of the European Union and not with national interests in mind -which is the natural attitude of member states. Majority voting does contribute to the efficiency of the cooperation. The European Parliament is directly elected and their co-legislative (and co-budgetary) powers illustrate the democratic character of the process. Finally, the presence of an independent judiciary underlines the rule of law nature of the EU cooperation.

All in all, it is not difficult to argue that the EU decision-making process on an overall basis is a democratic one.

That being said, if there is a problem with regard to the popularity of the European Union -and there certainly is one- the problem is not so much related to the democratic character of the decision-making process but has to do with the legitimacy and the credibility of the process. Indeed, citizens are not aware of these elements or do not understand their exact meaning, and politicians do not explain them. Often one may even wonder whether politicians themselves do understand the process fully.

Be that as it may, the ‘distance’ between the citizen and the EU has become a serious and urgent problem and has to be overcome.

Of course, in order to solve these problems there rests a responsibility with the EU institutions, members of the European Parliament in the first place, the media and, certainly also, the citizen him or herself. Indeed, for ordinary people it is not difficult to be informed about all topical developments. One only has to consult the multitude of news sites available.

However, above all, the first to be held responsible in this process are national politicians: the members of national governments and parliaments. Members of national governments should present themselves as a dimension of an international layer of governance and have to explain the achievements of the Brussels’ discussions. They must provide information on how the process works and should not blame Brussels in case they have not been able to push their national points of view fully through. Members of national parliaments have to recognise that their European agenda gradually has become as so important, not to say more important, compared to the national one.

So, Brussels is us and we are Brussels!

The conclusion to be drawn from this is that in order to cope with the global challenges of today the EU framework is a suitable one. With regard to the objectives and the direction of the cooperation, the member states are the ones playing a determining role in the EU integration process. The supranational procedures are the instruments, nothing more and nothing less, allowing the European Union to implement the objectives set out by the member states themselves. Moreover, supranational decision-making serves the democratic character, the efficiency and the effectiveness of the overall process.

This has to be explained to the citizen. It is the primary role for the member states to do so.

Therefore, from a point of view of substance, citizens have all interest to cast their vote in elections to the European Parliament.

Politicians in their turn have to start working to explain the relevance of EU cooperation. They have to hurry up, the deadline until the end of May is short.

There is no time to lose!