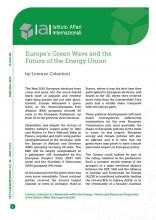 Lorenzo Colantoni, Europe’s Green Wave and the Future of the Energy Union, IAI Commentaries, 19:36, IAI, May 2019.

The May 2019 European elections have come and gone, but the much-feared black wave of populist and extreme right-wing parties did not take place. Instead, Europe witnessed a green wave, as the Greens/European Free Alliance (EFA) grouping secured 69 seats in the European Parliament, up from 52 in the previous 2014 elections. At the national level, the green wave was even more remarkable. Green national parties received the second largest number of votes in Germany, third in France, where it was the first time they participated in European elections and fourth in the UK, where they received more votes than the Conservative Tory party and a similar share compared with the Labour party.