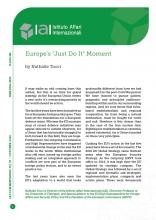 The last five years have been formative as far as European foreign policy goes. They have set the foundations for a European defence union. Whereas the EU acronym soup of recent defence initiatives may appear obscure to outside observers, for a Union that has historically struggled to inch forward in this field, they are huge. Furthermore, the outgoing Commission and High Representative have triggered a fundamental change in the way the EU works in the world. While institutional silos still exist, joined-up foreign policy making and an integrated approach to conflicts are now part of the European foreign policy lexicon, and to an extent practice too. The last years have also seen the EU’s adaptation to a world that looks profoundly different from how we had imagined it in the post-Cold War period. We have learned to pursue patient, pragmatic and principled resilience-building within and in our surrounding regions. And we now know that rules-based multilateralism and regional cooperation, far from being a natural destination, must be fought for tooth and nail. Nowhere is this clearer than in the case of the Iran nuclear deal. Fighting for multilateralism is essential, indeed existential, for a Union founded on these very principles.