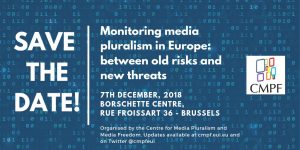 The year 2017 was marred by the assassination, in Malta, of investigative journalist Daphne Caruana Galizia, an event which represented one of the darkest hours for media freedom and media pluralism in the European Union in recent years. In 2018 other journalists on the front line, Jan Kuciak and Viktoria Marinova were murdered in Slovakia and Bulgaria. These crimes have profoundly shaken Europe and have had an impact on its image as a bastion of human rights and democratic values.

Several years of monitoring the state of play of media pluralism and freedom in Europe by the Media Pluralism Monitor (MPM) clearly show that no country is free from risks deriving from political, economic or legal conditions for media and journalism. What is worrisome is that the latest findings show a deterioration in most areas covered by the MPM. In particular, an increase of risk for the area of Basic protection, which covers the very essential conditions for a democratic society, including the safety of journalists and protection of freedom of expression, stands as a call for immediate action.

The aim of this event is twofold: first, to present and discuss the latest findings of the Media Pluralism Monitor (MPM 2017); and second to deliberate – with scholars, experts, stakeholders and policy-makers  from different parts of Europe – the digital-related challenges, trying to address possible ways of measuring such risks, as a precondition for acting upon them.