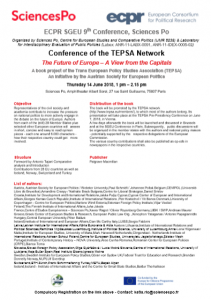 An initiative by the Austrian Society for European Politics.

Representatives of the civil society and academia contribute to increase the pressure on national politics to more actively engage in the debate on the future of Europe. Authors from each of the (still) 28 Member States plus selected other European countries will assess in short, concise and easy to read opinion pieces – each one around 6.000 characters – how their respective country could get more involved.

The book will be promoted by the TEPSA network, to which most of the authors belong. Its presentation will take place at the TEPSA Pre-Presidency Conference on June 7, 2018, in Vienna.
A few days afterwards the book will be launched and discussed in Brussels and at the SGEU Conference in Paris. Subsequently, public discussions will be organized in the member states with the authors and national policy makers – potentially supported by the respective delegations of the European Commission and by the Europe for Citizens programme of the European Union.
The various country contributions shall also be published as op-eds in newspapers in the respective countries.