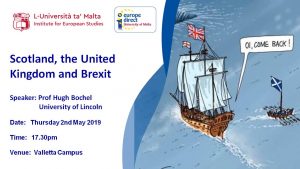 Although a relatively small part of the United Kingdom (fewer than 5.5 million people, or 8 per cent of the UK population), there have been considerable and important political changes in Scotland over the past fifty years and some divergence with other parts of the UK, and perhaps England in particular. Those include an apparent shift to the left in voting behaviour, the creation of a devolved Parliament that has continued to gain new powers, a growth in support for independence, and a considerable majority of voters in Scotland supporting remaining within the EU at the 2016 referendum.

This lecture outlines some of the key changes that have taken place in Scotland and the UK, and seeks to explain the reasons for the apparent growing divergence, and the implications of Brexit for the relationship between Scotland and the rest of the UK, and indeed for the future of Scotland.

Find more about the event here.