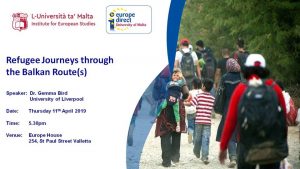 Europe Direct Information Centre University (through its host, the Institute for European Studies) will be hosting Dr Gemma Bird (University of Liverpool) who will give a public talk entitled Refugee Journeys through the Balkan Route(s) on 11 April 2019.

The talk discusses recent changes in EU border management that have limited refugees’ movement across Europe, and as such, have resulted in outsourcing of refugee settlement and care to states previously described as ‘transit’ countries along the Balkan Route(s): Serbia, and Greece. The problems related to refugee provisions and accommodation in these countries and along the Balkan Route(s) towards Western Europe will be talked about, highlighting the disparity of refugee services, housing and living conditions across the region, and acute and ongoing humanitarian crises. Based on the findings of a co-authored report written by Gemma Bird, Amanda Russell Beattie, Patryzia Rozbicka and Jelena Obradovic Wochnik the talk discusses the key factors affecting poor living conditions for refugees, including: overcrowding, fragmentation of services along the routes, and a lack of consistency in camp management. Subsequently, it discusses a range of other refugee housing options existing in transit countries: including informal and makeshift camps, squats, hotels and UN-supported housing schemes known as ‘urban shelters’, and notes the strengths and weaknesses of each. The findings are based on field research in Serbia, mainland Greece and the islands of Lesvos, Samos, Chios and Kos, between 2017 and 2019.