Dr. Song Tao, Vice Minister of Foreign Affairs of People’s Republic of China, participated in a high-level academic seminar at FIIA on 29 October. Vice Minister’s talk on EU-China relations was followed by a discussion. 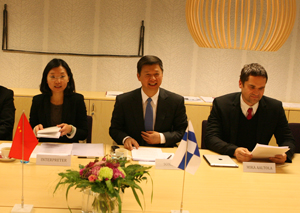 On 27-28 September, the fourth German-Nordic-Baltic Forum took place. The conference was entitled “EU Responses to external challenges as seen from Germany, Poland, Nordic and Baltic countries and the EU neighbourhood” and it led to a most fruitful exchange of ideas and opinions among the stakeholders of the European Neighbourhood Policy (ENP). The Forum took place at the premises of FIIA in Helsinki and was organised by the Institut für Europäische Politik (IEP) in cooperation with FIIA, with generous support from the German Federal Foreign Office and the Finnish Ministry for Foreign Affairs.

In February-March, Dr. Anaïs Marin will take part in a visiting researcher exchange with the Warsaw-based Center for Eastern Studies (OSW). During her 2-month stay at OSW, Marin will collaborate with researchers from the Russian department as well as her homologue Belarus desk.