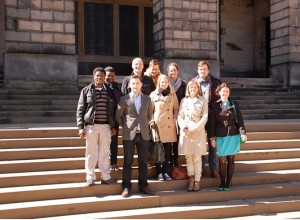 Bogdana Depo, The values within the ENP: shared, imposed or a matter of business? The Perspectives of the Eastern and Southern Dimensions, presentation together with Rosen Dimov (University of Istanbul), LISBOAN seminar “The European Neighbourhood Policy and the Lisbon Treaty: What has changed?”, Instituto Affari Internazionali, Rome, 22 March 2013.

Marlene Gottwald, A human security perspective on the future of Europe, workshop “The changing nature of human security”, organised by the Chatham House and FRIDE, Brussels. See the Agenda_ESPAS Workshop.

Abstract: This CEPS book examines two interrelated questions: 1) How has the European External Action Service (EEAS) functioned in the EU institutional architecture in the first two years of its existence? 2) What improvements can be made through the 2013 review and the 2014 revision of the EEAS’ mandate? The study contributes to the current debate through an in-depth examination of the EEAS’ relations with the EU member states, the European Commission, the European Parliament and its Delegations. The analysis is complemented by in-depth interviews conducted with senior officials from the relevant institutions. The authors put forward specific recommendations, organised around three basic roles that the EEAS plays in the EU’s external relations: a) leader, b) coordinator and c) information hub. See more.

Andreas Raspotnik, The Northern Corridor, in “The Maritime Dimension of CSDP: Geostrategic Maritime Challenges and their Implications for the European Union”, European Parliament, January 2013, Brussels. The full study available here.

Anita Sęk, An Audit of the EEAS in the Eastern Neighbourhood – to what extent have the new Treaty provisions delivered?, presentation at the LISBOAN seminar “The European Neighbourhood Policy and the Lisbon Treaty: What has changed?”, Instituto Affari Internazionali, Rome, 22 March 2013.