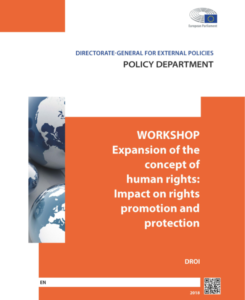 TEPSA has recently coordinated a publication for the European Parliament’s Subcommittee on Human Rights (DROI) on the Expansion of the concept of human rights: Impact on rights promotion and protection.
The publication was prepared by Giulia Bonacquisti (TEPSA Project Manager); Rosa FREEDMAN, (University of Reading) and Malcolm LANGFORD, (University of Oslo).

This report summarises the proceedings of a workshop organised by the European Parliament’s Subcommittee on Human Rights (DROI). The workshop, which took place in Brussels on 24 January 2018, was chaired by the Chair of the DROI Subcommittee, Mr Pier Antonio Panzeri (Member of the European Parliament, S&D, Italy). The aim of the workshop was to discuss the concrete impacts of the expansion of the concept of human rights on the promotion and protection of human rights throughout the world. To this end, both academic experts and representatives from the sector of non-governmental organisations (NGOs) were invited to present their views on the subject. In addition, the European External Action Service (EEAS) was also invited to present the EU’s action on human rights protection and promotion around the globe. In his introductory remarks, Pier Antonio Panzeri underlined that the concept of human rights has greatly evolved over the last decades and has expanded in different forms, with new rights holders and new dimensions of rights being identified alongside the existing ones. Within the EU’s external relations, economic, social and cultural rights have increasingly gained importance and the rights dimension has been mainstreamed across various policy fields. A trend to establish new legal instruments and procedures can be observed at the international level – recent examples in the United Nations (UN) framework include discussions on a declaration on the rights of peasants and other people working in rural areas, or on a binding treaty on business and human rights. The European Parliament (EP), reminded Mr Panzeri, has often been in the lead supporting this process of expansion. On several occasions, the EP has underscored the principle of indivisibility of rights. However, in the public debate there have been more sceptical voices, for example pointing out the risk that expanding rights could actually lead to a weakening in their protection and water down the concept of fundamental rights. In this context, the workshop aimed to allow a frank debate on potential critical aspects of the expansion of the concept of human rights, with a focus on the actual impact on the lives of victims of human rights violations, rather than theoretical considerations.