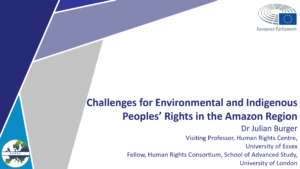 A new in-depth analysis has been published on the topic of “Challenges for Environmental and Indigenous Peoples’ Rights in the Amazon Region”, coordinated by TEPSA and commissioned by the European Parliament’s Human Rights Subcommittee (DROI).

The present analysis examines the environmental and human rights challenges in the Amazon region. It finds that the Amazonian countries pursue development policies in the region based on the exploitation on an industrial scale of natural and non-renewable resources that have caused and continue to cause deforestation, loss of biodiversity and engender human rights violations in particular affecting indigenous peoples. The analysis acknowledges the measures taken by the Amazonian countries to establish protected areas and support indigenous territories and their rights but concludes that the laws need strengthening and effective enforcement. The analysis argues that the protection of the Amazon biome is an essential part of the global efforts to reduce greenhouse gases and concurs with the view of some scientists that there is an urgency to stop forest loss. The analysis further notes that the most effective guardians of the Amazonian forest and its biodiversity are its indigenous peoples. The analysis concludes by arguing that the European Union has an interest in contributing to the protection of the Amazon and its indigenous peoples. It recommends, among other things, that the EU strengthen its direct support to Amazonian indigenous peoples and environmental defenders and develop effective measures which target EU-based companies whose activities cause deforestation.