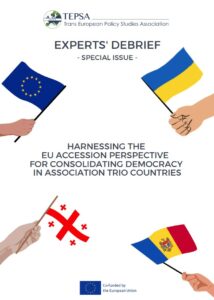 The Trans European Policy Studies Association (TEPSA) has been working to analyse the progress being made in EU accession prospects for the so-called ‘Association Trio’: Ukraine, Georgia, and Moldova, who have all applied to join the EU as a consequence of Russia’s war of aggression in Ukraine. As a special issue within our Observatory, we have gathered key experts from across and beyond the TEPSA Network to analyse how placing these three countries within the enlargement framework might advance democratic reforms. We would like to look at the lessons to be drawn from other accession cases and debate how pre-accession could best be designed to leverage democratization. On June 17, the European Commission released its opinion on whether the Trio should be given candidate status, and on June 23-24, the European Council Summit might decide on granting the EU candidate status to Ukraine, Georgia and Moldova. It is in this context that our experts have analysed the importance of the enlargement framework for supporting democracy in the Trio countries.

In addition to a foreword by TEPSA Executive Director Mariam Khotenashvili, our expert contributors include: