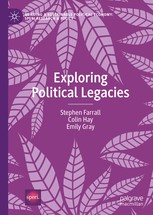 The concept of the political legacy, despite its importance for institutionalist and historically-minded political analysts more generally, remains both elusive and undeveloped theoretically. This book seeks to address that oversight by building on existing studies which have approached the notion of a legacy to offer a clear definition and operationalisation of the term which might be used to inform future research. Legacies we view as traces of the past in the present; the claim to the existence of a legacy is both a causal and a counter-factual claim. The authors propose, in the light of this, a multi-dimensional approach to gauging political legacies, reflecting on some of the theoretical, analytical and methodological concerns which need to be addressed in establishing credible claims to their existence. These we develop and illustrate with respect to the literature on Thatcherism.