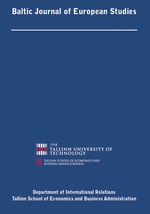 The authors of this research paper, Andrea Éltető and Katalin Antalóczy, propose an explanation of the differences between the aims and the reality of national exports through this cross-country comparative study.

The role of exports in economic growth came into focus in most countries after the international crisis in 2008-2009. Exports of EU Member States gained momentum from 2010 onward but with certain changes in their structure and direction. In several countries, the turn towards non-EU areas, such as China or Latin America was part of the state export strategy. On the one hand, this article describes these foreign trade strategies and their institutional framework of the Iberian, Baltic and Central European governments, detecting possible similarities. On the other hand, there is also an analysis recent export data. This way, a picture on the structure and direction of exports of periphery economies is provided and it can be compared to the aims of the given states.

The main hypothesis of the study is that there is a gap between the reality and the intentions of the governments. The size of this gap varies and is influenced by certain factors such as the different involvement of multinational companies in foreign trade or the different economic structure of these countries. Finally, the paper includes a short literature review on state trade promotion policies and discuss these policies and their institutions in the Baltic, Visegrád and Iberian countries.

The full research paper is available in the following link.