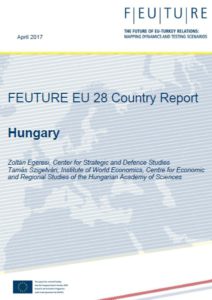 Zoltán Egeresi is the author of the Hungary report which is part of a series on the future of EU-Turkey relations. “The Future of EU-Turkey Relations: Mapping Dynamics and Testing Scenarios” (FEUTURE) is a Horizon 2020 project coordinated by Prof. Dr. Wolfgang Wessels, the  Director of the Centre for Turkey and European Union Studies at the University of Cologne.

Hungary has supported Turkey’s accession to the European Union (EU) since the country itself became a member in 2004. According to the official Hungarian position, the negotiations should be fair and, if Ankara manages to fulfil the Copenhagen criteria and implement the acquis communautaire, Turkey should become a full member. This stance was maintained by left- and right-wing governments alike, all of them saying that the dialogue needed to be continued regardless of any troubles between the EU and Turkey. Hungarian governments usually emphasized that despite their pro-accession views the issue of membership should be settled in the framework of the EU with the consensus of all member states.

The most controversial issue has certainly been whether Turkey is an integral part of Europe and its culture. According to a Eurobarometer poll in 2005, 51 percent of the Hungarian population was in favour of Turkey’s accession (while the EU average was 39 percent) and some 75 percent of respondents said that Turkey was part of Europe. It is interesting to note that the share of those supporting Turkey’s EU accession was the same on the right and left side of the political spectrum (50 percent each).