Taking Stock of EU-Turkey Relations: A Successful Kick-off for FEUTURE

On 26 and 27 May 2016 the research project “The Future of EU-Turkey Relations: Mapping Dynamics and Testing Scenarios” (FEUTURE) funded by the European Union’s Horizon 2020 programme was officially launched. About 100 participants including researchers from the consortium, distinguished Turkey experts, stakeholders and practitioners from Turkey, the European Union (EU) and the neighbourhood, as well as students and the wider interested public got together at the FEUTURE Kick-Off Conference in Istanbul. This event was hosted by Istanbul Bilgi Universitesi.

During the debate of the first day, which was open to the public, different views as to which path relations will most likely take in the future were exchanged and discussed in light of FEUTURE’s research aims and design. FEUTURE’s broad assessment of this relationship acknowledges the depth and intensity of relations between Turkey and the EU. It will combine both a look ‘backwards’ through its analysis of narratives which have shaped the debate in Turkey and the EU in different phases with a forward-looking approach which aims at delineating a most likely scenario(s) for the future and related policy recommendations. All participants welcomed this project and its research approach, because they felt that at this point in time substantial and ambitious research on EU-Turkey relations is highly relevant. 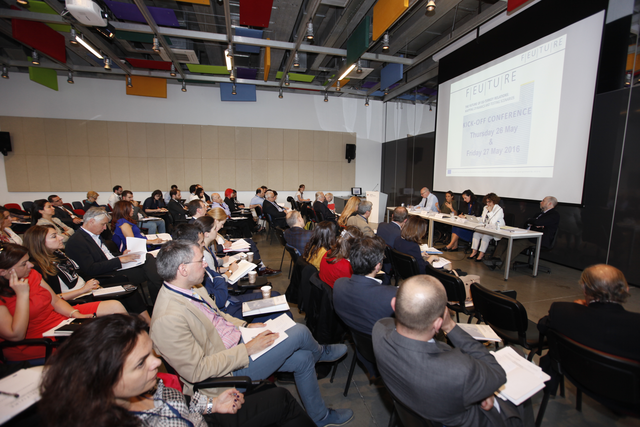 The first day of the conference focused on discussing FEUTURE’s scenarios and narratives at two high-level panels with the project’s researchers and renowned Turkey experts from the project’s Scientific and Policy Advisory Board. The aim was to update the project’s research agenda and make it fit to meet the challenges of analyzing EU-Turkey relations which constitute a ‘moving target’ par excellence.

At the first panel, chaired by Funda Tekin (FEUTURE Project Director), Nathalie Tocci (FEUTURE Scientific Coordinator) presented three ideal-type scenarios (Convergence, Cooperation, Conflict) that will be tested through FEUTURE’s research in the upcoming three years. Overall, Tocci identified coexisting trends and concluded that for the project this will also mean that research will most probably not identify only one most likely scenario but rather delineate a mix of their features. Andrew Duff (former MEP), Nilgün Arisan Eralp (TEPAV) and Ronald Linden (University of Pittburgh) agreed and particularly stressed the need for flexibility in these three scenarios. Furthermore they encouraged to think “out of the box” and to scrutinize the EU’s relationship with other (new) external countries.

The second panel, chaired by Senem Aydin-Düzgit (Bilgi University), elaborated on the project’s ‘backward perspective’ of EU-Turkey relations in form of the historical analysis of narratives. Wolfgang Wessels (FEUTURE Project Director) and Atila Eralp (METU) presented this part of FEUTURE research that starts from the assumption that a critical assessment of the history of EU-Turkey relations is a key element for delineating scenarios for the future. Therefore, the research aims to 1) map the milestones and periods of EU-Turkey relations and 2) identify the most salient narratives, which have shaped the political debate both in the EU and in Turkey during different historical phases. The representatives from the FEUTURE Scientific and Policy Advisory Board, Albert Rohan (Independent Commission on Turkey), Ofra Bengio (Tel Aviv University) and Meltem Müftüler-Bac (Sabanci University) further contextualized the narrative analysis of EU-Turkey relations by elaborating on four key-terms that have been used in the past and present in order to structure the interrelatedness of the EU and Turkey: 1) Bridge, 2) Model, 3) Orientation and 4) Asset. Additionally, the debate critically assessed the question of how relevant history really is for the present and what the added value of a historical analysis is in light of EU-Turkey relations. Finally, the importance of understanding the EU integration process itself for analyzing EU-Turkey relations was underlined.

Getting Started with the Research: Workshops on the Second Day

The second day provided the researchers from the consortium the possibility to familiarize themselves with the details of the FEUTURE research. The Work Package (WP) Leaders organized parallel workshops on the six thematic dimensions that FEUTURE will analyse: politics, economics, security, energy/climate, migration, identity/culture. It will be the aim of their research to identify the drivers that determine the relations from these different perspectives. At these workshops in the morning of 27 May 2016, the WP leaders together with their research teams prepared the first steps and updated their research designs with regard to the latest developments.

In a ‘synthesis and outreach’ session led by Nathalie Tocci and Sinan Ülgen the consortium discussed the third phase of the project, which will synthesize and test these results within one or more scenario(s) with the aim of producing policy recommendations. The Kick-Off Conference concluded within the first meeting of the FEUTURE General Assembly, in which the partners’ representatives discussed matters concerning the consortium as a whole.

A detailed Conference Report will follow shortly and will be available at www.feuture.eu.